Welcome to the Weather Objects Modelling Language (WOML) space in FMI Wiki. The primary goal of WOML is to define meteorological phenomena or other objects in a semantically meaningful way by using GML Feature model as the basis of the language. This is fundamentally different modelling decision compared to more data-oriented feature models, like Climate Science Modelling Language (CSML). Even though cold fronts and warm fronts in WOML might share exactly same set of properties, they are modelled as different feature types, because the semantic meaning the objects carry about the atmospheric conditions in their surroundings are quite different.

WOML tries to avoid defining any direct visualization hints or rules for its feature types. The decision is done to encourage the users to separate the presentation of the meteorological objects from the data they carry.

On this site you will find documentation, XML Schemas and other information about WOML.

Development for a GML Application Schema for Meteorological Objects, like weather fronts, rain areas and such, was started at Finnish Meteological Institute in autumn 2008. The primary goal was to enable saving and retrieving forecast and analysis objects created by forecasters using SmartMet II Workstation, a GML based XML language and OGC Web Feature Service.

In late 2009, after several iterative versions, the application schema then called the FMI MetObjects was renamed to Weather Objects Modelling Language (WOML) to better reflect the potential for using it in the international meteorological data exchange. In May 2010 the first full WOML version of the schemas was released. 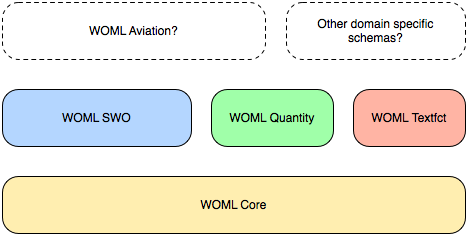 In the future application domain-specific profiles or schemas may be defined by composing them from the lower level WOML types and specializing them if necessary.

Each major release of the WOML schemas will have they their own namespace with postfixed release date (http://xml.fmi.fi/namespace/woml/core/2010/05/28 for example). These major releases might contain chages that are not backwards compatible with the previous releases, although we try to change them as little as possible. The changes affecting schema validation are described in the release notes of each schema release.

Minor, backwards compatible changes (all the documents valid before the change are still valid against the new version) will be released in the same namespace and the new schema files will replace the previous ones. These minor revisions will be distinguished with increasing "version" attribute of the schema files. The version number of the major schema versions are always "1.0", the next minor version might be "1.1" or "2.0" depending on whether any new elements or types are introduced. The changes in the minor versions are also documented in the release notes.

New major releases of WOML Core also require changes in other WOML modules: in the minimum the core namespace has to be updated. For this reason, all WOML modules are released simultaneously with each Core major release, even if there would be not other changes if the depending modules.

For more information see WOML talks presented at different conferences and workshops. For the most recent information, check out the WOML Blog (also available as Atom feed).

If you have any questions, please don't hesitate to contact FMI (woml (at) fmi.fi).

WOML 2012-11-15 released
Unknown User (rinne) posted on Apr 20, 2015
New WOML release 2012-11-15 has been released. The main focus for this release was better support for severe weather warnings, including custom warning areas, and a new feature collection type for publishing the weather warnings and the data for the predicted hazardous meteorological phenomena together as a package. The new warning-related feature types are part of the WOML Textfct package at least for now, but described in a separate XML Schema file.…

WOML 2011-11-15 released
Unknown User (rinne) posted on Dec 13, 2011
This year's last version of WOML modules, "2011/11/15", was released today. When announcing the previous WOML version https://agora.fmi.fi/display/WOML/2011/08/22/WOML+2011-06-15+Released in August I wrote that I hoped that we'd seen the last major turn in the rocky road to the final WOML curve geometry definitions. Should have known that I was wrong again. Starting from the WOML 2011/11/15 only the GML geometry types are supported, including the verbose and cumbersome gml:Bezier.…
4 Comments

Bug fix of WOML Core 2011-03-15
Unknown User (rinne) posted on Apr 20, 2011
A "bug fix" for the latest WOML Core was released today. The only issue fixed in this update is WOML-44 https://agile.fmi.fi/browse/WOML-44. There was on error in defining ReferenceableObjectArrayAssociationType used as type of sharedObjects property in WOML collection types. The intention of this element is to contain any number of identifiable GML objects referenced by more than one element inside the WOML collection. When the same objects (like locations, parameter definitions,…
Overview
Content Tools
{"serverDuration": 120, "requestCorrelationId": "f6085ff481d668e6"}