In most cases the the semantics of the concrete types is defined by their names rather than a distinctive set of properties: A Ridge has a well-defined and well-known meaning in the field of meteorology, and it's interpreted as a different phenomenon than a ColdFront, so they are modelled as different object types even though they share exactly the same properties. As the needs for explicitly define object type specific properties, they can easily be added to object types. A example of this is JetStreamType which adds segmentMaximumWinds array property to define different maximum wind speeds at different parts along the jet stream, or StormType, which has properties for rain phase and maximum wind speed occurring within it's limits, as well as information about it's thunderstorm nature. 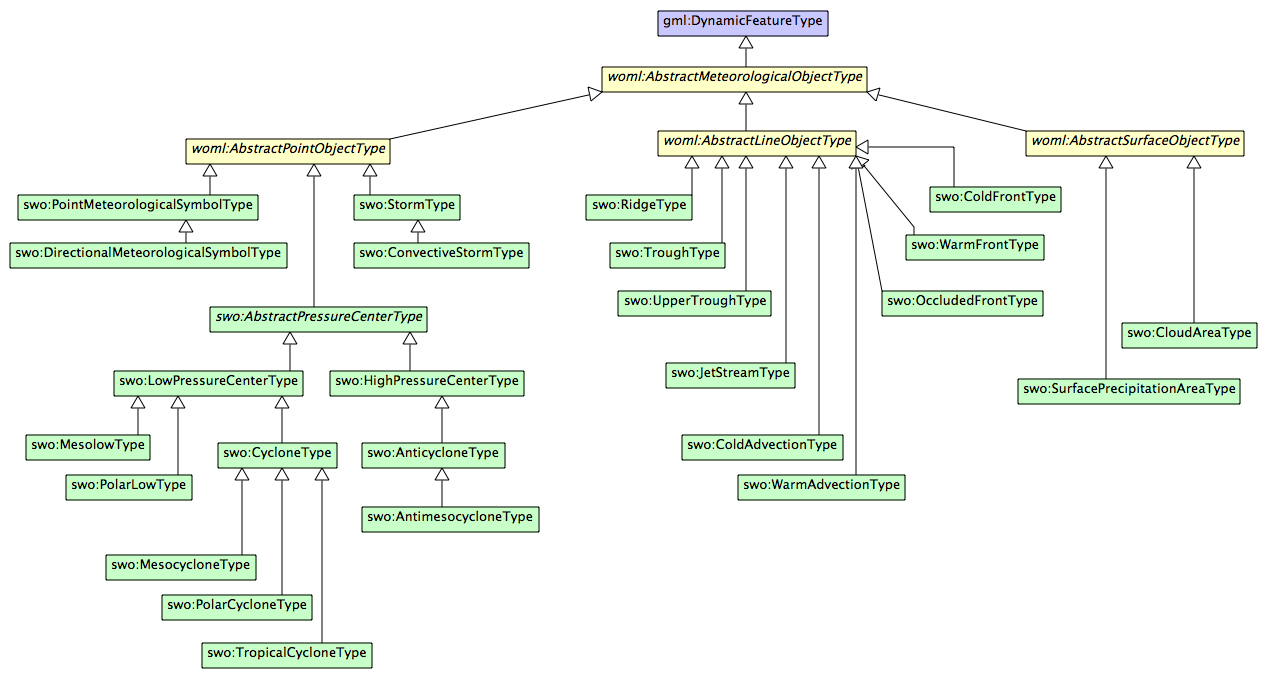 Most of the concrete point object WOML SWO types are modelled following the semantic definitions in NASA SWEET Ontologies version 2.1, specifically phenAtmoPressure.owl and phenAtmoPrecipitation.owl. Their geometries are defined as a current center point of the phenomenon, and optionally by effectiveRadius property defining the approximate circular boundary around that point within which the weather conditions are primarily defined by this phenomenon.

The location of a Point Object can be specified either using GML point data structures with a specified coordinate reference systems, or as the value of the knownPlaceProperty referring to an external catalog entry for well-known locations, like cities or aerodromes.

In addition to pressure center and storm objects, the WOML SWO also defines generic symbol objects using PointMeteorologicalSymbolType. The semantics of these objects are entirely defined by the externally referenced, well-know symbols, such as the canonical weather symbology defined by WMO and ICAO traditionally used in printed weather charts. WOML does not re-define these symbols, but offers a a reference mechanism for using them as part of the weather forecasts or analyses.

Please note that in many cases the using point objects defines leaves the weather conditions description open to speculation considering the geographical area they are intended to cover. No phenomenon really occurs within a singular point. When a forecaster adds a symbol object for occasional rain showers at a geographical point in the forecast, the editor software probably visualizes it with some (non-singular) symbol on the screen. There are no guarantees however, that another forecaster could be viewing the same forecast using a screen with different resolution, zoom factor or a different size to the visual symbol. This could result in misinterpretation of the forecast: does this mean that there will be showers in the whole of Southern Finland or just around Helsinki? For this reason the point objects should be used with effectiveRadius property given if there is a possibility of this kind of misinterpretation. 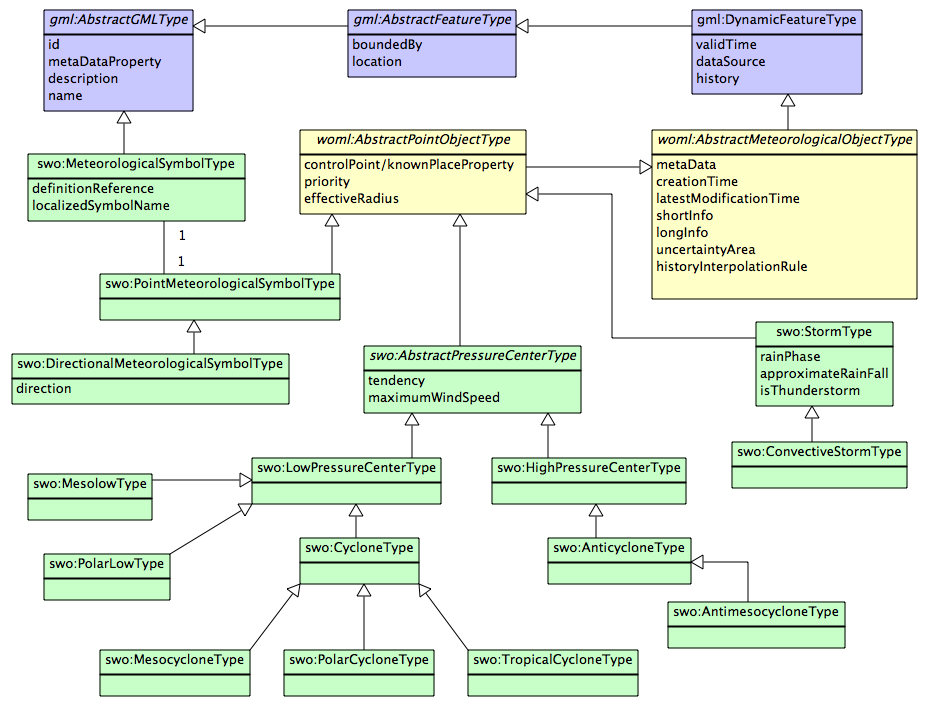 The geometries of the WOML SWO Line Objects are defined by a one-dimensional controlCurve. The effective area of defined phenomenon in respect to the curve depends of the object type: For a ColdFront, the curve defines the leading edge of the temperature drop-off on the Earth's surface associated with a cold front, but for JetStream it defines the axis around which the highest wind speeds occur. The controlCurve is defined by connected consecutive curve segments (line string, bezier or geodesic) enabling both sharp-edged and smooth curve geometries.

The vertical elevation of the whole object measured from the ground, sea-level or some other reference level can be given using the elevation property. The ElevationType object instances can be used either for defining a single elevation value or a elevation range with minimum or maximum values given.

Line Objects can be attached to a specific externally defined points (shared connection points) from either or both ends of their controlCurve. This is particularly useful for front objects, which typically form systems with cold and warm front lines closing on each other and forming an occluded front. To guarantee that all three objects actually connect to each other at all rendering resolutions at this so called "triple point", the end points of the cold and warm front as well as the start point of the occluded front is defined to be the same point by setting the endPointConnectsTo and startPointConnectsTo properties to refer to a single SharedConnectionPoint element contained in the sharedObjects element of the containing WeatherForecast or MeteorologicalAnalysis. 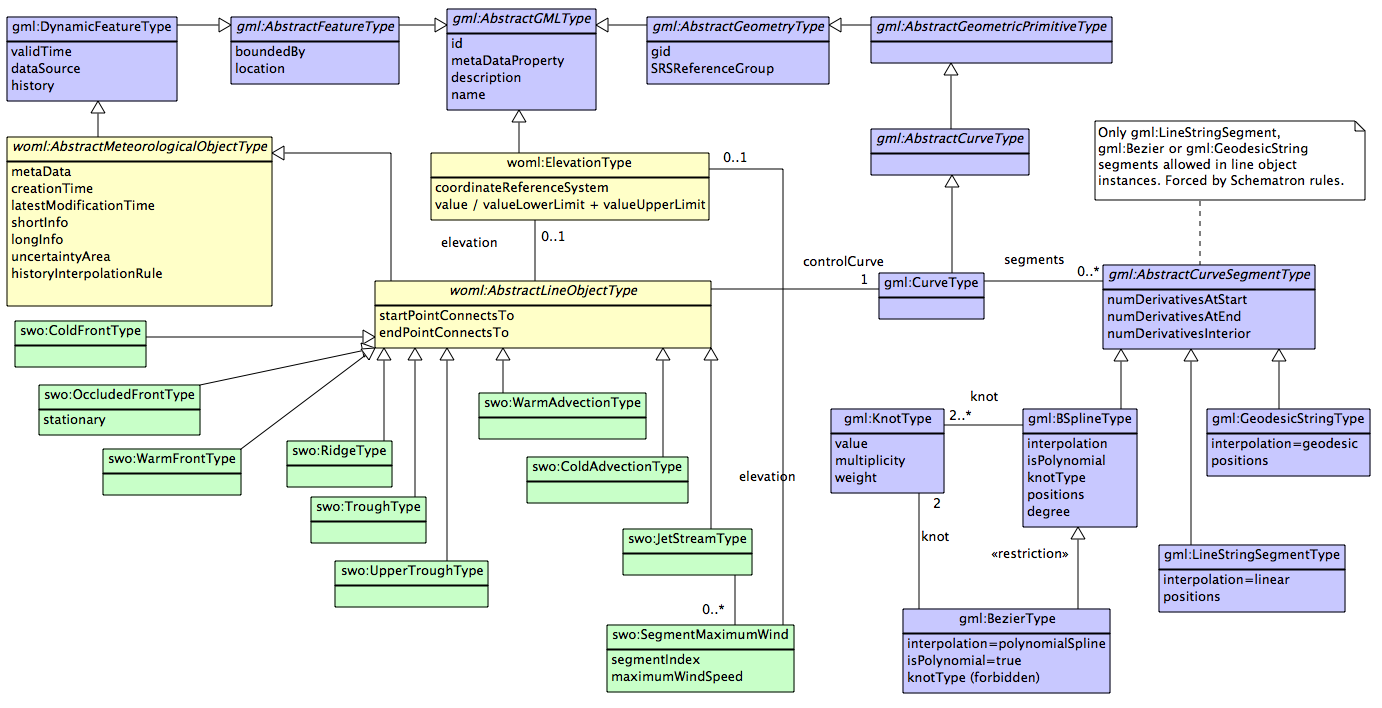 The WOML SWO Surface Objects define geospatial areas of similar weather conditions or phenomena. The geometry definition of these objects are derived from GML AbstractSurfaceType. Concrete types for surfaces defined using Rings consisting of mixed sequence of line segments (cubic spline, bezier & line string). The structure of the CombinedSegmentedSurfaceType and LinearRingSurfaceType is modelled in a fashion similar to GML PolygonPatchType: it has one exterior ring property defining the outer boundary and zero or more interior ring properties defining "holes" inside the exterior not belonging to the surface of this object. Like with Line Objects, the rings may be either sharp-edged or smooth lines depending on the use. For Sensible Weather Objects, the boundaries typically are smooth to indicate the approximate nature of the boundaries of the phenomena.

The elevation and the line string interpolation of the controlSurface are modelled very much like their corresponding properties for Line Objects. 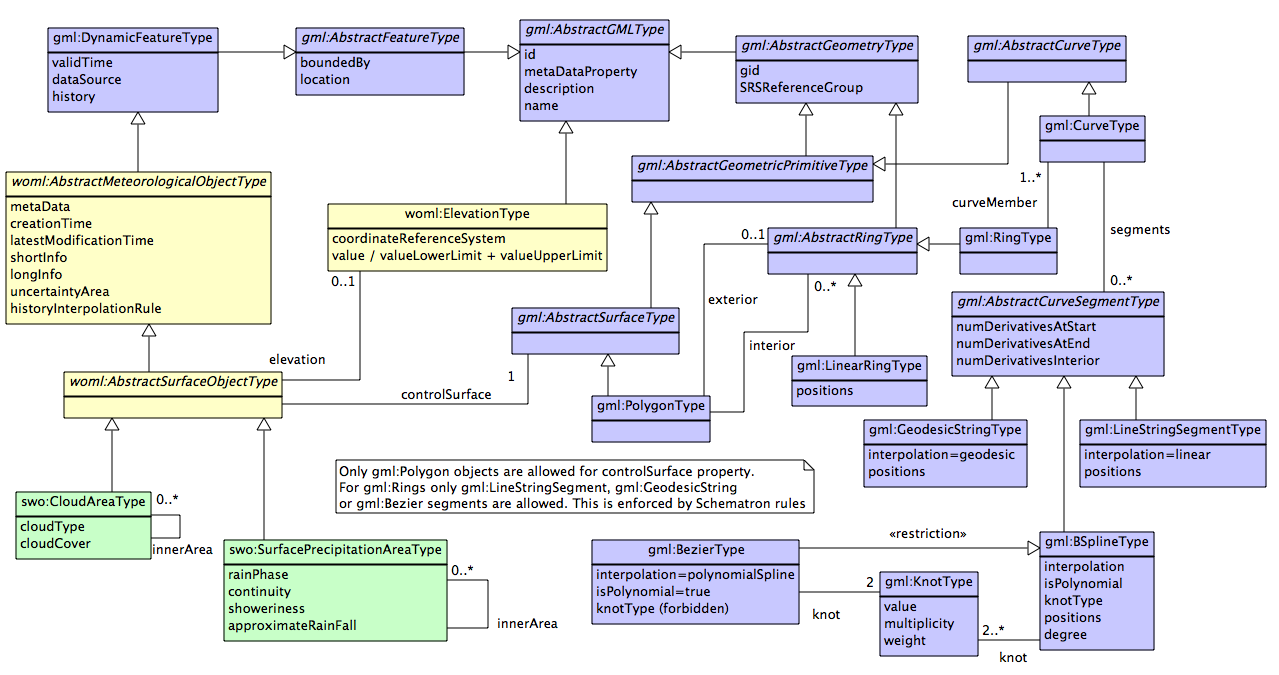 Dealing with uncertainty in time and space

Any WOML objects inherited form AbstractMeteorologicalObjectType may have an uncertaintyArea property to describe the uncertainty typically associated with predicted weather object of actually being located at the predicted or measured place at the given time. The probability of the objects' location at the given valid time is given by the shape and the size of the UncertaintyArea. The associated object must always reside completely inside the geometry defined by its uncertaintyArea. The probability of being located inside this area is given with the probabilityOfBeingLocatedInside property as decimal number between 0 and 1.

UncertaintyAreas may be cascaded to describe the distribution of the location probability. The contained UncertaintyAreas must always have
greater probabilityOfBeingContainedInside value and their exterior must be completely inside the parents exterior.

The modelling activities in Weather Information Exchange Model (WXXM) developed by Eurocontrol and FAA might affect the WOML-SWO future versions.

Issues scheduled for the next versions